The parent academy or workshops, as they are also called, take place in the New York State and across the Race to The Top country. They are prescribed to each school district. Districts download the workshop modules located at engageny.org, NYSED website. The parent academies promote the Common Core Learning Standards (CCLS) which are part of the Common Core State Standards (CCSS). 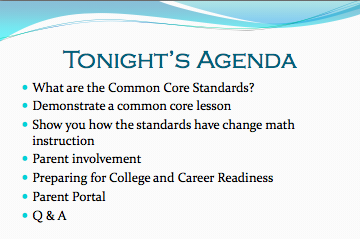 When Ms. Ricca, assistant superintendent for curriculum and instruction, opened the event on January 9th, she praised parents for attending in big numbers. (There were about 80 residents). She continued that when she organized a parent academy 15 years ago, there were about 6 people in the room.

The actual agenda (picture 1) differed a little from the official flyer originally promoting the event (picture 2). It was signaling there were last-minute changes made to the program. (The workshop agenda can be downloaded from the district’s website).

Ms. Ricca introduced main points everybody needed to know about the Common Core Learning Standards praising them for “…everybody is doing the same thing,” documented in a DC Public Schools’ video, extolling the advantages of everybody reaching the same level. She guided attendees through a real Math lesson emphasizing progression from one grade to another and pointed out differences from time the audience was enrolled in school and now, when the process of understanding and not memorization is in the center of attention. She asked parents to collaborate with teachers to help with their student’s progress.

Ms. Gross, ELA and special education teacher, took parents through a reading lesson explaining the difference in delivery of the instruction and reiterated that curriculum is not the goal, it’s a vehicle to get to the standards. The learning standards are the goal. The CCLS emphasize non-fictional reading material and “close reading” when the students read the text at least twice, highlight words that are not familiar to them, and don’t look at questions located after the text. They are not “front-loading”. Malverne district is downloading the reading modules and adapts them to the classroom. Question was raised about teachers training. Certain teachers are selected and sent to the training (Albany, BOCES) and then they train the rest of the staff—so called turnkey collaboration. Because of the assessments the focus right now is on grades 3 to 9.

Dr. Romano, HS principal, talked about college and career readiness: “It’s never too early to talk to our children and grandchildren about college.” He mentioned a Kaplan report stating that taking rigorous courses, honor roll and AP classes, college level classes and college level pressure make students college ready. He was asked, if kids could be pushed too hard when they are little. Romano continued: “…what you are learning from these challenging courses, being pushed academically and being forced to sit down and be a student…you learn about grit.”

Mr. Nehlsen, assistant principal at H.T. Herber, emphasized the ease of use of the parent portal. With name and student ID, parent can log on and see a wealth of information about the student, including report cards, attendance and more within moments. With one account parents can see information about all their children. The portals are currently in use at the HS, H.T. Herber, and Davison. It will be introduced in M.W. Downing in a couple of weeks. (Not a remark the wealth of information could be leaked to the universe).

The prescribed parent academies are omitting other important parts of the Common Core State Standards—high-stakes testing, teacher, principal evaluations, and data mining. Parts that are not related to educating students, but that are costlier to implement than the Learning Standards themselves.

Leaving the workshop, residents unaware of the complementing parts might think that Mr. Duncan, U.S. education secretary, was right when he declared that the rallies, test refusals, and negative press were actually organized by oversensitive “white suburban moms”. 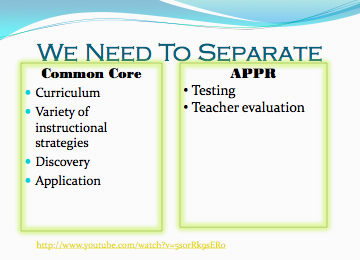 During the workshop, the notion of excessive testing and teacher evaluation were reduced to few sentences. “Here is the thing that I have to emphasize to you. Common Core is not the test. … I hate the test. Yes, the test is not the good part of the Common Core,” declared Ms. Ricca and continued: “The testing is falling under this thing called APPR. Teacher evaluations are under the APPR. You have to separate it. Common core is good. Common core is curriculum.”

Residents can’t separate good (CCLS) from bad (testing, APPR, and data mining). The promoters surrounding the U.S. Education Department and National Governors Association didn’t give us that choice. The CCSS is an indivisible package we have to pay for. Students pay by being trained to tests and then waste instruction time taking the tests, residents pay by funding corporations that are developing the tests. The tests measure only what is easily quantifiable. They don’t measure a complete individual. Using an algorithm this tiny bit of measurement is then used to evaluate teachers, principals, and grade schools. Last spring, the manipulation with the algorithm allowed to predetermine the results, e.g., 30% of students passed the test, but 70% of teachers were rated effective and 7% highly effective on the HEDI scale.

Parents, teachers, and administrators realizing the negative impact the other parts of the Common Core package have are not silent. They do not pretend that excessive testing, APPR, and sharing of the student’s personally identifiable information don’t exist. Together they voice their opinion. Parents have their children refuse tests (download sample of test refusal letters (pdf)) and are sending letters to legislators. The principals oppose the APPR and send letters. The superintendents send letters (pdf). The legislators held several hearings (pdf). The Assembly and Senate bills rejecting the Race to The Top are pending (see previous post).

Residents need to know all aspects of what’s going on in the schools. We need parent academies more often than every 15 years. With the speed the changes are being implemented we would need 3 workshops in a school year, but we need workshops that encompass all issues.

What is your estimate of instructional time that is wasted on tests? And what is the cost of administering the tests?

MAJOR BREAKING NEWS: Trumpist Insurgents Are Plotting to Assassinate President Joe Biden and Murder All of Congress During the President's Upcoming Unofficial State of the Union; Meanwhile, the GOP Is Having the Insurrectionists' Leader, Donald Trump, Headline the CPAC Conference https://t.co/rmSaZ368WO

Donald Trump lied about a lot of things, but the one thing he didn’t lie about is when he said he could get away with murder and not lose support.